How To Get More Patients Into Your Practice: 7 Proven Strategies 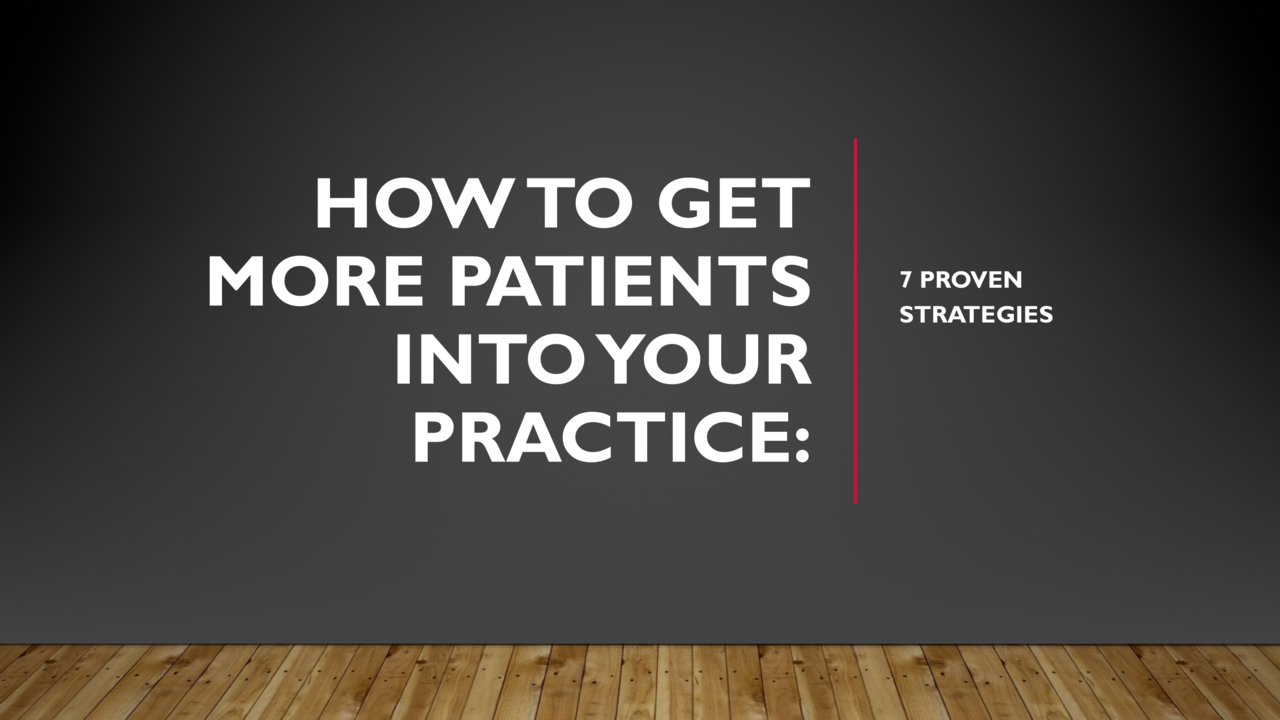 What if I told you I could show you how to get more patients into your practice – even double the current amount?

What if you just had to make some changes to your approach, not double your abudget?

At ACT Dental, we’ve built our reputation on giving our clients real strategies that produce real results without substantially increasing their overhead at the same time. Today’s list of advice is no exception.

How To Get More Patients Into Your Practice In 7 Steps

Even if you’ve spent a lot of time reading other articles and books on the topic, you’ll definitely find something new from our 7 strategies below. Most importantly, it’s actionable advice you can begin using right away.  This process was articulated really well in a fabulous podcast we did on the Best Practices Show recently with Dr. Chris Phelps.  You can listen to it here.

However, this is an extremely prevalent problem hurting dental practices all over the world. So, chances are, this one tip alone will show you how to get more patients into your practice.

A lot of dentists believe their phones are getting answered. They may even use voice over IP to support as many as 100 phone lines. Unfortunately, they only have one or two people to answer those calls, so the extra phone lines don’t actually produce new customers.

What’s worse is that the more dentists spend on their marketing efforts, the more they’re usually losing because of unanswered calls. As much as 55% of the costs involved can go to waste!

The solution to this costly problem is to make sure someone’s around to answer these calls. Despite what a lot of dentists think, most patients are calling between 1 and 2 pm. If you need to pay for an extra person to man the phones, it’s worth it.

2. Ask Patients To Make Their Appointment While You Have Them On The Phone

As you just read, answering the phone is a huge step in the right direction.

However, the second tip our dental marketing consultant gave us is just as important: Your team needs to ask the new patient to schedule an appointment while they’re still on the line.

Research has shown that about 60% of the time, team members aren’t asking new patients to schedule an appointment. In essence, these employees are sabotaging their own chances of bringing in new business.

Now, this might seem like a problem with a straightforward solution: Just tell your people to always ask patients to schedule an appointment before the call is over.

However, first, there needs to be a choice. If a team member says, “Let’s get you scheduled. We have an opening tomorrow at one,” the patient might comply.

Unfortunately, without a choice, there’s a good chance they won’t feel as much of an obligation, either, and may not show up. Worse yet, the appointment costs you money you would have made by scheduling someone else.

Thankfully, the actual solution is still very simple: Just give the patient two options at a time.

“What works best for you: mornings or afternoons? Great. How about 2 or 4 pm?”

Google Reviews have become the best source of referrals. A decade ago, it was your current patients, but people are now using Google to decide which dentists to go to based on positive reviews.

So if you want to learn how to get more patients into your practice, you should definitely focus on earning positive reviews from patients.

In fact, they’re so important, that you should actively request them from your satisfied customers.

Whenever a patient expresses their gratitude (“Wow! That’s it? That was easy! Thank you so much!”), they’re giving you a golden opportunity to respond with something like, “My pleasure! It’s always nice hearing that from a patient. Hey, would you say something similar in a Google review for us?”

Once the patient agrees, you can even show them right then and there how to do it (just make sure they’re on their own cell network – not your practice’s Wi-Fi).

4. Getting Past The Insurance Barrier

The “insurance barrier” is a mindset that gets in the way of scheduling new appointments. As the name suggests, the problem has to do with new patients who call and immediately ask if the practice takes their carrier.

As dental marketing consultant Chris Phelps describes it, the “insurance barrier” can be divided into two types of patients, depending on which question they ask:

Over the years, Chris has listened to thousands of phone calls and has found that most team members treat these two types of callers the exact same way.

According to his research, about 80% of the people who ask that first question have no idea what it means. In other words, the insurance question really isn’t a barrier until the team member turns it into one.

Obviously, your people should always tell the truth.

That said, your team members can answer with something like, “We’re not in network, but neither are hundreds of our patients who have the same insurance you do. They still choose us though, because…” Then you tell them about all the benefits of choosing your practice.

People tend to be psychologically committed to their network, so don’t be surprised if this method only works about a third of the time. Still, that’s a lot of business you would never have a chance of seeing after just one call.

Another big reason a lot of callers don’t become patients is because team members don’t know how to convert “price shoppers.”

These are the callers who have already decided that their most important metric for making a decision will be cost.

And a lot of dentists have unwittingly played into this with advertisements that mention little else besides their prices. Patients are left to think that a crown is a crown – from one practice to the next – so the only differentiator they consider is price.

This is why most dentists are racing to the bottom in an effort to undercut one another – a competition that never ends well.

If you were worried that learning how to get more patients into your practice would follow a similar path, you should be relieved by now.

That said, this situation is the one exception. The easiest way to get a price shopper into your practice is simply to get rid of their biggest concern.

So if someone calls about the price of a crown, offer them a complimentary exam and X-ray so they know exactly what’s going on. This will give you a much better opportunity to prove your value and make a connection with the patient.

This one probably seems obvious, but for many dentists, it’s not an option. They don’t have the capacity to see patients as quickly as those people would like, so they go elsewhere.

Generally, 3 to 5 days after a patient calls is as long as you have to secure their business. After that, they may make an appointment, but there’s a good chance they’ll keep calling around, especially if they are in pain.

A lot of times, dentists solve this problem by adding more hours, services, or chairs to their practices. This can definitely help, but don’t make any investments until you really analyze the problem.

For example, you might receive one or more no-shows a day, on average. If so, the next time someone calls and they want to be seen ASAP, tell them you’ll let them know the second a no-show occurs that day so they can get in.

Did you know that, on average, Costco customers spend 247% more on every trip to that store than people who shop at Walmart?

That’s a lot of money, especially when you consider that people are already paying a membership fee just to shop at Costco, and that the main selling point is doing so will save customers by buying in bulk.

So what’s going on here?

Well, it turns out that membership programs pre-commit people to the idea of saving more and, thus, shopping more.

That’s not the only reason our dental marketing consultant recommends using a membership program at your practice, though.

The other reason is how many people lack dental insurance in this country – 65%. So you can use membership programs to overcome this barrier by offering popular services to participants at discounted rates.

This is not “in-house insurance.” That’s completely different.

However, in the majority of states, it’s perfectly legal to offer discounts through a membership program exclusive to your practice. Some states may make you pay a licensing fee, but it’s definitely worth it.