Break Free From the Grind 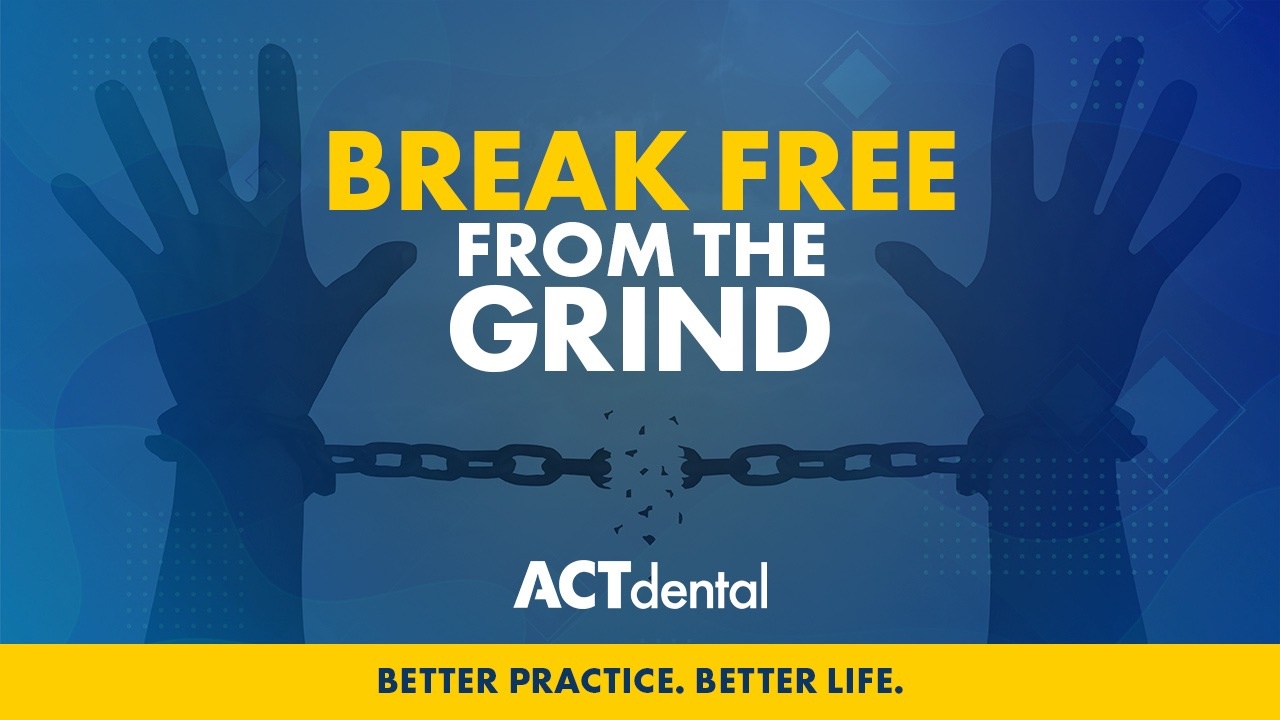 It seems like we’re always stuck working instead of doing the things we want. Time is the key—there’s never enough of it, and we’re always trying to buy more. Kirk recently interviewed Dr. Sully Sullivan and he recounted, “I had the good fortune of starting in my father’s practice after dental school, and when I convinced him to let me buy into it, I discovered early in my career how much work bogged me down. There’s so much more to a practice than performing dental procedures, and you can’t do it all—not without burning yourself out. There comes a time when you want to transition to working less, and the secret is that you need to replace yourself! This of course doesn’t mean you hire someone else and then quit dentistry forever; instead, you need to surround yourself with a good team, foster greatness in the practice, and recognize the benefit of saying ‘no.’

Your days can be consumed with the kind of dentistry that makes you feel like you’re on a hamster wheel—for Sully, it was fillings and single crowns—and it always leaves you exhausted at the end of the day. Though it’s good for your numbers, it’s not the kind of work that’s fulfilling. Dr. Sullivan found that while his patients were happy, they weren’t thanking him—he felt as though he just wasn’t changing lives with that kind of dentistry. Moreover, it kept him from doing the procedures he wanted to do. It's important to recognize that when you say “yes” to something, you’re saying “no” to something else, so you need to make sure that you say “yes” to the right things.

For Dr. Sullivan, the right thing was dental implants, so he decided to cut back on the number of fillings he would do each day to make room. He told his team that he would only do two patients’ worth of fillings each day—one in the morning, and one in the afternoon—and naturally, they thought he was crazy. What he found was that he now had time to think. He could walk around the office, listen and talk to patients and team members, and see how the business functioned. Suddenly he could involve himself more in the practice and work with his team to plan for the future.

Running your practice as a business

Being involved in the business side of the practice made will help you to realize its benefits—it is a source of income beyond performing dental procedures. Currently, most of your income is a result of you as the dentist, but your goal for the future is to make it that of you the business owner, and give yourself more time away from the practice. But to do so you need to know that it will function in your absence—it’s essential to cultivate an effective team. Kirk says that “The art of leadership is developing people,” and that’s exactly what you need to do. Fostering greatness in yourself should never be overlooked, but at the end of the day if that’s all you’ve done, then you’re just a great monkey and a great employee.

But if you want to grow your business, you need to kindle greatness in those around you—every team member should leave better than they were when they arrived. It may seem strange to speak positively of an employee leaving, but the truth is that your practice will change, and so will the people. Almost every new hire brings more to the practice or is a better fit than the previous employee. The goal is to grow, so if you have no level of turnover, you’re probably not moving forward enough. The goal of moving forward is to “replace” yourself in the practice, and not in the sense that you just stop doing certain procedures. Dr. Sullivan said “I attribute my success to the people I surrounded myself with—I made it a point to be the dumbest guy in the room, so I always had someone to look up to. If you make yourself available as a mentor, you will ensure that your team receives the proper training.”

We can’t add more hours in the day, but we can choose how we spend the ones we have. Instead of keeping yourself chained to your practice, consider taking a step back and giving yourself more freedom in your life. Instead of letting yourself be overwhelmed by exhausting procedures, limit how often you perform them. Let your team help fill in the gaps in your practice—don’t try to do everything yourself. Speak to the talented ACT coaches, and they will use their experience to help you reach your goal. Make your goal to work fewer days throughout the year, and in doing so, you’ll achieve a Better Practice and a Better Life!