Are You On The Front Nine, Or The Back Nine? 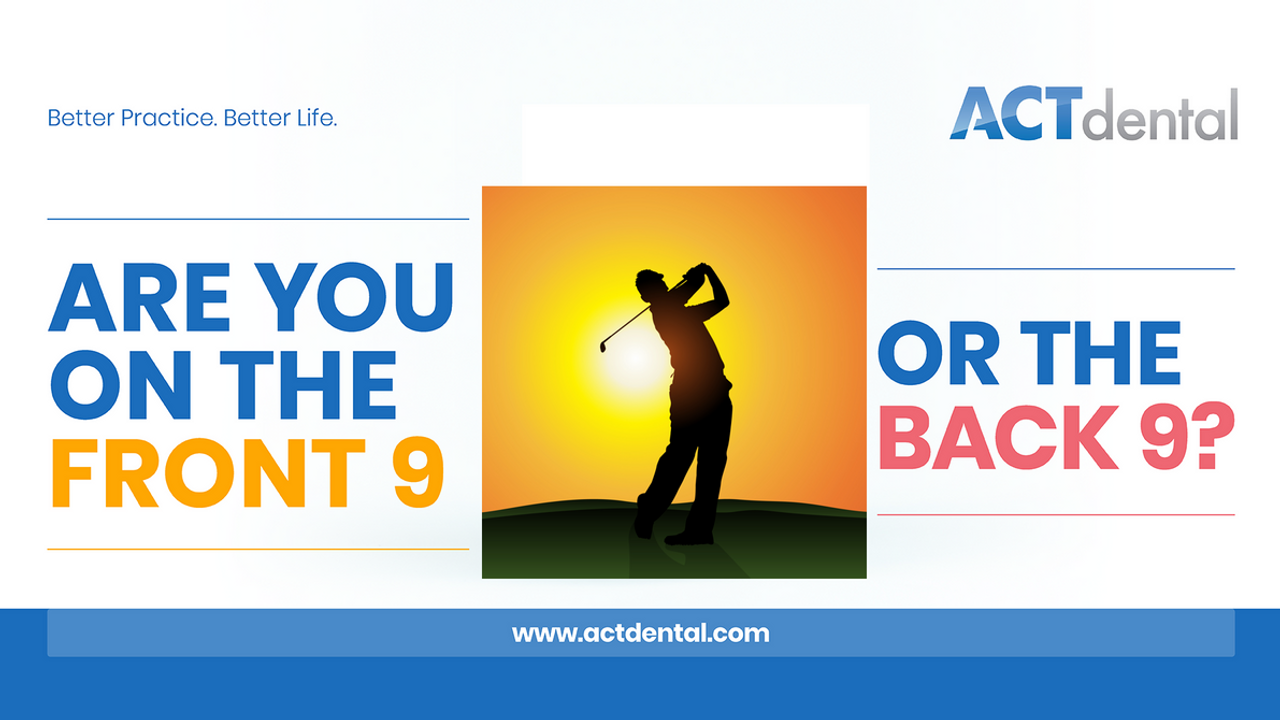 When reflecting on your life and your career, where do you see yourself?

Last week, I was having a conversation with Kirk and another doctor, and Kirk asked a fascinating question; "When do you think you made the turn from the front nine to the back nine?" Growing up in a family full of golfers, I was naturally very intrigued by this comment, so I inquired. It's a simple concept taken from the book Halftime by Bob Buford. It's about moving from success to significance.

Here at ACT Dental, we have the blessing and honor of helping doctors and their teams create better practices and better lives. At some point, we all wake up, and we realize it's halftime. We take stock of what we have done. We measure our wins and losses and naturally ask the question, how will the second half differ? How will we make it better?

When assessing how we will move forward in the back nine of our careers and our lives, our focus often shifts to relationships and time. On the front nine, the focus is on building, working, and gaining success, yet at the turn, a shift occurs. As Buford says, we transition from "making a living to making a life"; we focus on significance rather than success.

Part of ensuring the success of this venture is creating smooth transitions from the front nine to the back nine and ensuring doctors' lives will transition from not only living successfully but ultimately living lives filled with significance.

The front nine, the working years, are all about building success. These are the days in which we set ourselves up with the systems and processes, focusing on growing our business. We search for the right team to surround ourselves with to help us get to where we want to go. Those that have had the most success on the front nine have often done so with a coach or caddy. It's hard to know what to do, and we are often floundering and uncertain.

We struggle, and often it is messy. This is the time in which we make mistakes, and we learn. In practice, we get systems in place and create predictability and structure. It's the time for hard work and laying foundations.

The turn does not have to be about age but rather about mindset. Dr. Michael Poulos, a periodontist from Denver, recently reflected on his journey from success to significance and the role that ACT Dental played in that:

"When you are on the front nine, you are working very hard to build something. You are building a practice, a family life, a portfolio for retirement.

You want to be ethical; you want to take care of the people you spend time with and make your practice successful. Along the way, you want to make enough money to enjoy the fruits of your labor, and you want to save enough so that at the end of your career, you can retire and enjoy it.

I think that many people measure success in terms of when they have the money to retire. I think the basis of what we call success can also get wrapped up in quantitative procedures or fees. For example: how many crown preps I can do in a certain amount of time or how much I charge for a particular surgical procedure. Too often, and indeed while on the front nine, we equate our success to financial success, but it's not all that, not even close.

As I look back at those early days, building a practice, working hard, creating a better life, I realized that my real success was not found where I believed it would be. Most of the true achievements that I have had in my life were not measured in those terms; the success in that first half had to do with the respect that I gave and received from the community, my patients, my friends. It was about time spent with my family giving back to the community that gave me so much.

I've accomplished many goals and received a lot of honors and awards both in and out of dentistry. I've done the things that made a successful career.

I was fortunate enough to have mentors all the way through my practice, so I had people I could look up to and respect. I found a great ally when I found ACT, and they helped my partners, and I focus on building a significant and not just successful life."

Talking with Kirk, he shared, "When I was in my 30s, I had all the time in the world, and I worked like I did. Then as the years passed, I got busier; Sarah and I had kids, lost a few friends, and realized I don't have forever, and I can't do everything. I began to think, I don't know how much time I've got, and I have to capture every moment, I have to make every moment matter. Suddenly, time became my new rich."

Dr. Poulos offered some great insight into his experience as he shared, "Because of my amazing mentors, I made the turn and started playing the back nine in my career earlier than most, probably 6 to 10 years into my practice. At that point, I began to look at doing things to help other doctors in the Denver area, to spend more time with my family and children, and to give back. To give back to dentistry, give back to the community, and give back to the society that allowed me to be successful.

As a doctor and a professional, you have many people around you that look to you and trust you. In the beginning, you work hard to build that trust and success, and you are making a lot of big decisions for the people around you. It's important to realize you are doing what you were trained to do because that will go away one day. There are many trained professionals, whether they are doctors or lawyers, accountants or CEOs, that have thrived on the adrenaline rush from being in charge. One day that will be gone, and at that point, you have to look back on your life and what made it matter. You see, the significance was not in the things you thought were important.

I started putting those other things in place unknowingly well before I retired. The transition I had from working full time to working part-time, to not seeing patients, from being Dr. Poulos to Michael Poulos was easy for me because I was able to continue to do a lot of the things that gave me joy and to spend time with the people that made my life significant.

You cannot simply have a line where you are going to jump from one to the other.

For your life to be significant, it has to start as quickly as possible."

Jenni Poulos is a lead practice coach with ACT Dental. 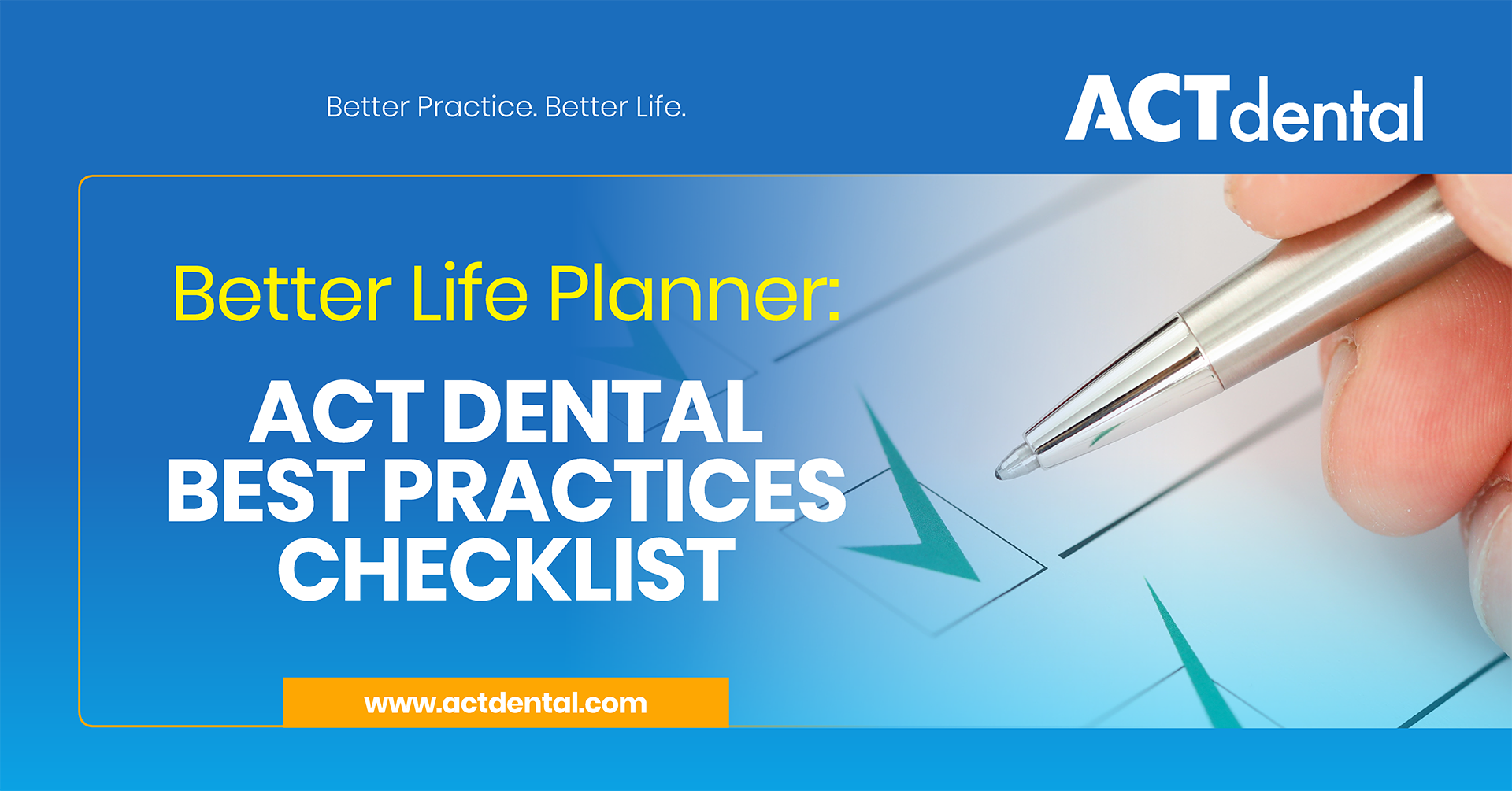