As Goes the Leader... 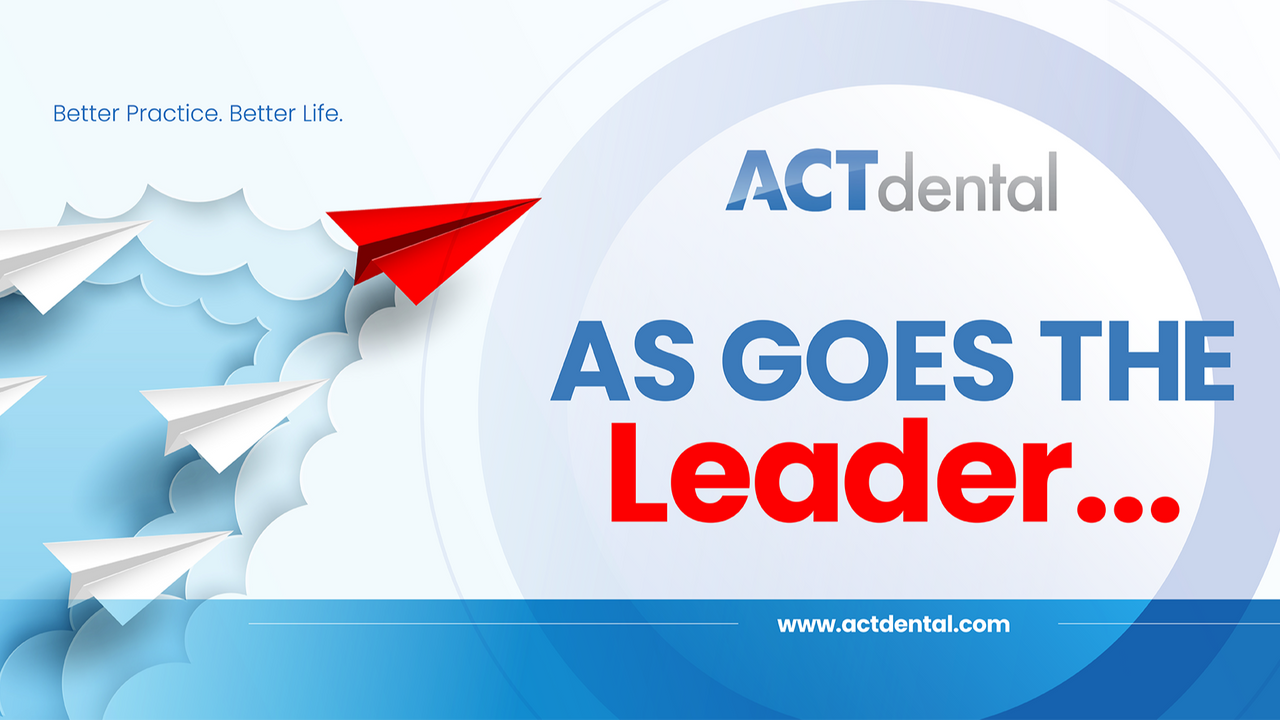 Heather Crockett: Can you tell us how you demonstrate your leadership skills?

Barrett Straub: Every dentist needs to make sound decisions and guide their team toward success. However, the times I'm most challenged as a leader and when I really need to lean into my leadership skills is when I need to have what I call "courageous conversations." These are emotional conversations with members of your team that revolve around business but include some level of conflict.

Anytime there is any level of conflict involved, the leader's emotional intelligence becomes the key to success. Both parties involved in courageous conversations should aspire to not be right but to work toward a mutually beneficial result. It is one of the hardest things to do for sure. I love to be right. Yet, I'm my best leader when I resist that temptation to be right and focus instead on first truly hearing the other person, helping them keep their own emotions in check, and then guiding the conversation toward solutions rather than dwelling in emotion.  In short, I try to show my team members that "I hear you and your emotions are valid. Now, let's put our direction toward the future and find a solution to this conflict.

Heather Crockett: So, how do you handle disagreements with team members?

Barrett Straub: The only way to handle disagreement in a healthy way is through communication. Sounds simple, but definitely not easy to do. In my office, we have what we call a "48-hour rule". It states that all of us have 48 hours to share a frustration with a fellow team member.  If we are unwilling to get uncomfortable and talk with each other within 48 hours, then we agree to let it go and not hold it against the other person in the future.

Probably my best coaching here has come from learning along with my team how to create that vulnerability-based trust that Patrick Lencioni refers to. I know I've succeeded when I become aware that two team members had a disagreement and solved the challenge on their own. Every time this happens and when the practice is held high as the ultimate focus of these conversations, the entire team gets stronger because what is sent is a message that on our team, we work through our conflict instead of holding grudges.

Jenni Poulos: Would you say that a good leader can coach up the team and delegate and elevate those around them?

Barrett Straub: Yes. A good leader creates other leaders around them.

Jenni Poulos: Tell us about a time that you were challenged as a leader and what you gained from the experience?

Barrett Straub: I'm in a unique situation as both a dental practice owner and a leader within ACT Dental. One day with my ACT Dental hat on, I got frustrated with my boss, Kirk, and I was defensive rather than looking for a solution. I wasn't my best. I realized this a couple of days later when, as the boss of my dental practice, I was on the other side of this common business dilemma. That dilemma is when one side doesn't communicate in the best way what they are concerned about, and the other side allows defensiveness to drive the conversation rather than a solution-based mindset. What did I learn? Anytime there is conflict, the best resolution from the ensuing conversation will come only when both parties put the business first with a goal of finding mutually beneficial solutions. When I was in conflict with Kirk, I should have taken a deep breath and said, "what's the real challenge here because I want to help find a solution." likewise, in a similar conversation a couple of days later as the boss; I should have said, "here is why I'm a little stressed, and I'd love your help finding a solution."

Jenni Poulos: Being a leader is a skill you must constantly be developing.

Barrett Straub: Yes, and I've learned lots from my many, many leadership fails. The reality is, leadership is a skill that one must develop. Some people are born with characteristics that get them closer to being a good leader, but you'll never find a great leader that didn't become great through lots of mistakes and learning from those mistakes. I absolutely love the idea of the growth mindset and the fact that our brains are neuroplastic. What I mean is we can literally become better leaders by putting some intentionality towards that goal. The growth mindset, combined with the science of neuroplasticity, says anybody can develop the skills to be a leader as long as they put in the work.

In his book, Think Again, Adam Grant talks about a level of confidence called the "sweet spot of confidence." He stated that humans are attracted to confidence, but overconfidence is a very unlikeable quality. On one end of the spectrum, Adam Grant describes, we have "overconfident arrogance." These people are extremely confident without the competence to back it up. They don't have enough humility to see that they aren't perfect, have areas for improvement, and are too arrogant to ask others for help. Now the other extreme is a total lack of confidence. He calls it the "imposter syndrome" and describes it as where your skills outweigh your confidence so severely that you don't take risks, you don't act like a leader, you don't put yourself out there where you can succeed. Both extremes are bad, and there's a sweet spot of leadership. I call my ideal leadership humility-based leadership. In my definition of humble leadership, you know that no matter what you put your mind to, you will succeed, but you're humble enough to know that there are other people whos help you need, others with great ideas and skills to help you reach your goals.

Heather Crockett: How do you respond to criticism?

Barrett Straub: As I indicated earlier, although I sometimes fail,  I try hard not to instantly become defensive. Criticism might come from a coworker; it might come from your wife; it might come from someone angry with you telling you how awful you are. The part of criticism that hurts the most is when people criticize you, there's usually some truth in it. One of the best emotional intelligence tricks to use when you're getting attacked is to shut down the defensive by saying, " I know there's some truth in here, and even though it hurts, I'm going to listen because I'll take a good idea from wherever it comes from."

Jenni Poulos: Do you think being humble is one of the most essential values for leadership?

Barrett Straub: Probably the most important! It's also a two-edged sword, where you have to be confident, paired with a healthy dose of humility and vulnerability.

Jenni Poulos: Who's your favorite leader and why or someone that's exemplified the type of leader you hope to be.

Barrett Straub: The best leaders, in my opinion, are usually those leaders that don't care if you see them as a great leader or not. They just want to be their best and help as many people as they can. So I don't usually look at the people normally referenced as great leaders - Presidents, big company CEOs, military generals, etc. For me, those people normally don't have nearly enough humility. The people in my life that have proven great leaders are the unsung youth sports coaches, teachers, church leaders, and small business owners that work hard every day to make the lives of those around them just a little bit better.

Jenni Poulos: I like the idea that conceptually a leader, is not in back pushing; they're in front pulling. Can you respond to that idea?

Barrett Straub: Absolutely. The best leaders are very clear about purpose and clearly state where their business is going. They skillfully paint a picture of where the team is going and what needs to happen to get there. A great leader says, here is where we are going to go, but I need your help to get there, and I want your input on how to get there as efficiently as possible. The leader portrays the idea that failure isn't an option, but the path we travel may have some deviations. When a leader is able to express confidence in setting goals they know their team can achieve, along with the humility to know they won't get there without the team's hard work and great ideas, they are leading through pulling rather than pushing.

A leader must know their why and purpose, then clearly define the two. They must know where they're going and why they are going there in order to lead the team confidently.

Jenni Poulos: What's one of our favorite comments here about leadership?

Barrett Straub: As goes the Leader, so goes the team.

Jenni: It sounds like you are describing core values here.

Barrett Straub: Yes, you are right on.  Core Values are seen in actions, not words. It is essential for leaders to embody, model, and give life to core values through their actions and not their words.

Heather Crockett: How do you measure your own performance at work as a leader?

Barrett Straub: Quite simply, are we reaching our goals, and is our team culture healthy?

Heather Crockett: If you could give one piece of advice to others about leadership and how to become a great leader, what would it be?

Barrett Straub: Be the first to admit you don't know it all, and at the same time give people the confidence that they can accomplish anything they set their minds to. If you simply focus on those two things, you will be a great leader.

Being a leader is truly a lifelong learning experience, and in dentistry, it can be lonely in private practice. Watch our Leadership is Lonely webinar to gain more insight and gain confidence in your ability to lead your team and your practice to success and ultimately a better practice and a better life!